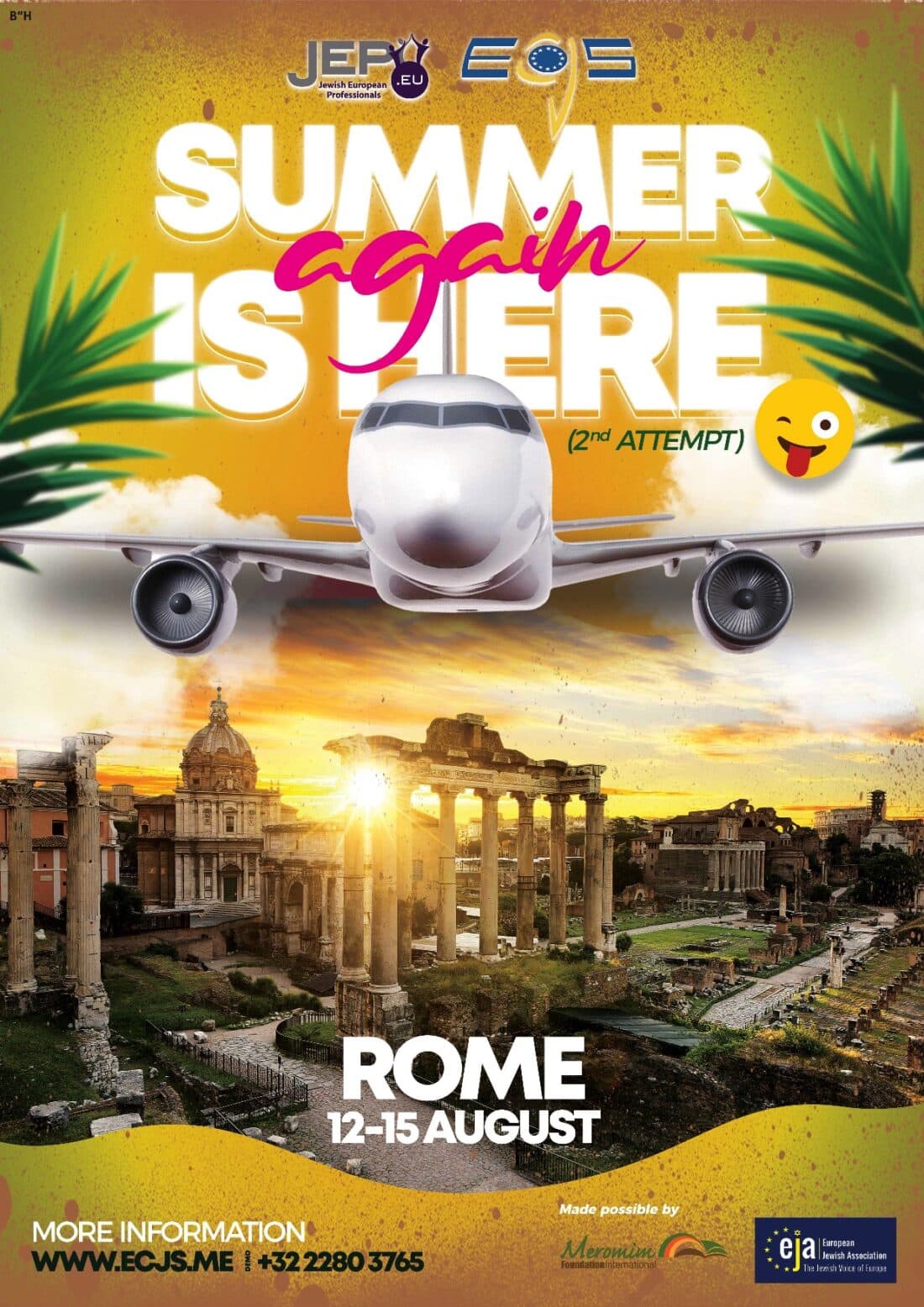 Join hundreds of young Jews aged 18-39 for a special ECJS & JEP event, as we relaunch both organisations after the last year’s Covid pandemic.

This event will follow all local Covid-19 regulations regarding masks, social distancing etc. All participants must provide a vaccine certificate showing second vaccine of Astrazenica, Moderna or Pfizer vaccine on or before 30th July 2021, or single vaccine J&J/Janssen vaccine on or before 15th July 2021. Please note : Entry to museums etc may be restricted – depending on Italian regulations during the event.

If you do not have a completed vaccine certificate you must provide a RT-PCR Covid-19 test showing it was taken no earlier than 09 August 2021 or a medical certificate from a doctor / green pass confirming you have recently recovered from Covid-19 and therefore ineligible for a RT-PCR test / vaccination. 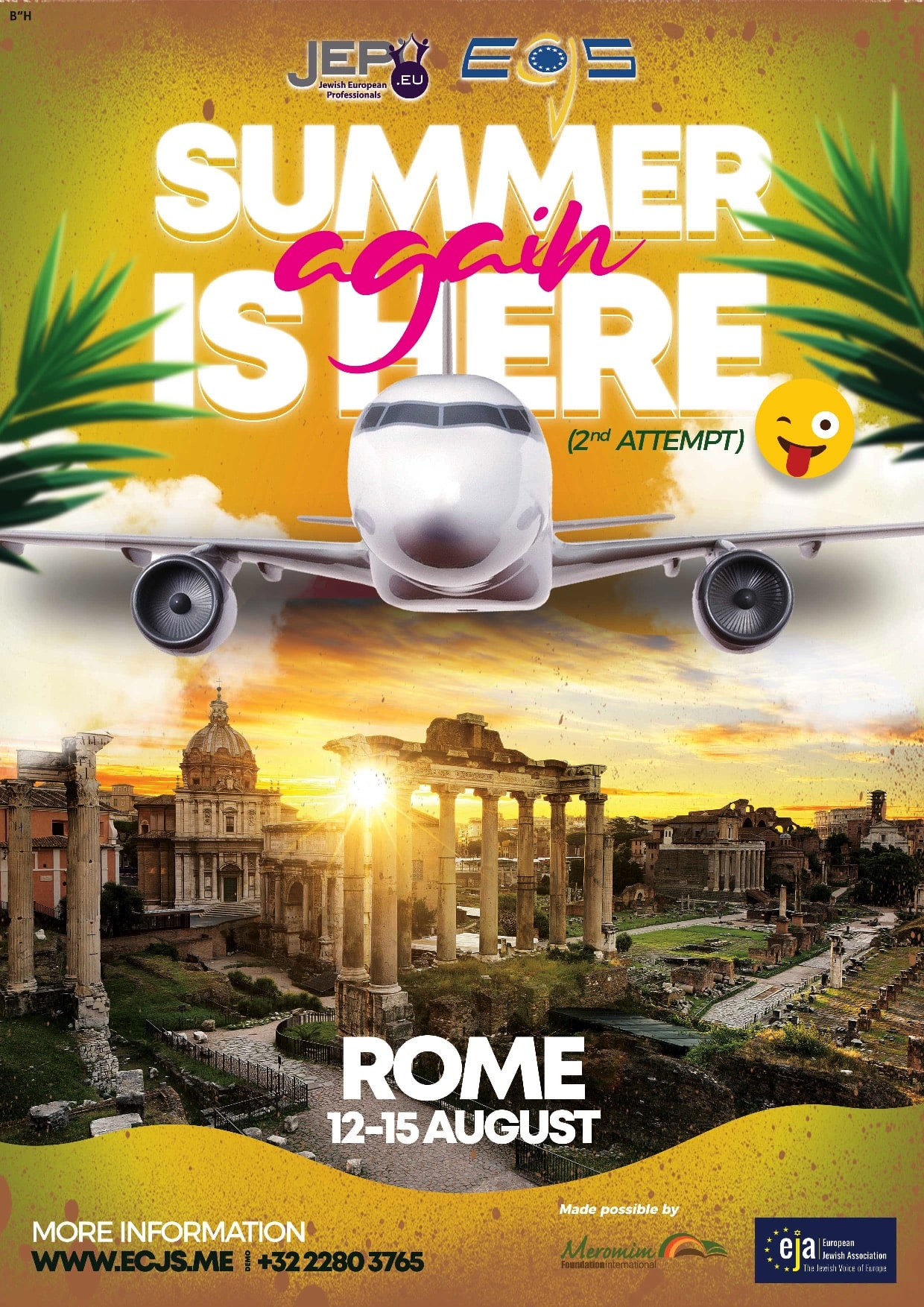 To attend the event on 12-15 August 2021, you must purchase an event ticket as per package rates given below. Please note that you must be a registered ECJS member to purchase tickets to our events. Not a member? Become a member now!

All prices are per person. If you pay by bank transfer please email us (info@ecjs.me) a copy of your receipt from the bank as we will not see your payment for 4-5 working days and we will not know you have paid.

Extra nights before and after the event are available through ECJS at special group rates. If you request a twin occupancy extra night without a friend(s) and we are unable to match you up with another participant(s), you will be asked to upgrade to a single room.

SUBSIDIZED PACKAGES
Eastern Europeans or Former Soviet Union (born and living in currently), may take the 18-30 price option. To get these prices you must also hold a valid 1 year paid membership subscription.

Please note if you are living in Rome, we will release nearer the time “local packages” for you to participate. 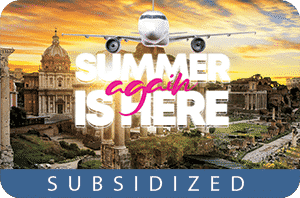 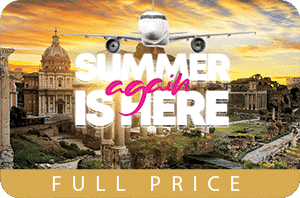 Day trip out of the city

Rome – A heady mix of haunting ruins, awe-inspiring art and vibrant street life, Italy’s hot-blooded capital is one of the world’s most romantic and charismatic cities.

The result of 3000 years of ad hoc urban development, Rome’s cityscape is an exhilarating sight. Ancient icons such as the Colosseum, Roman Forum and Pantheon recall the city’s golden age as caput mundi (capital of the world), while monumental basilicas tell of its history as seat of the Catholic Church. Lording it over the skyline, St Peter’s Basilica towers over the Vatican, testifying to the ambition of Rome’s Renaissance popes and the genius of its game-changing architects. Elsewhere, ornate piazzas and showy fountains add a baroque flourish to the city’s captivating streets.

A trip to Rome is as much about lapping up the dolce vita lifestyle as gorging on art and culture. Idling around picturesque streets, whiling away hours at streetside cafes, people-watching on pretty piazzas – these are all central to the Roman experience. The tempo rises in the evening when fashionable drinkers descend on the city’s bars and cafes for a sociable aperitivo (drink with snacks) and trattorias hum with activity. Elsewhere, cheerful hordes mill around popular haunts before heading off to hip cocktail bars and late-night clubs.

Our hotel is surrounded by landscaped gardens and  has an outdoor pool – as well as being conveniently located between the city and both airports. Rooms come with modern or classic furnishings as well as air conditioning, satellite tv and wifi.

The history of the Jews in the Roman Empire traces the interaction of Jews and Romans during the period of the Roman Empire (27 BCE – CE 476). In Rome, Jewish communities thrived economically. In the course of the 1st century CE, Christianity began to develop from Second Temple Judaism. The Christian emperors persecuted their Jewish subjects and restricted their rights.

Following the 1st-century Great Revolt and the 2nd-century Bar Kokhba revolt, the destruction of Judea exerted a decisive influence upon the dispersion of the Jewish people throughout the world, as the center of worship shifted from the Temple to Rabbinic authority. Some Jews were sold as slaves or transported as captives after the fall of Judea, others joined the existing diaspora, while still others remained in Judea and began work on the Jerusalem Talmud. The Jews in the diaspora were generally accepted into the Roman Empire, but with the rise of Christianity, restrictions grew.

The first great upheaval since Paul IV established the ghetto came during the Napoleonic Wars. Eager to promulgate his own set of universal laws, Napoleon determined that every citizen under his rule would enjoy equal protection under the law. The Napoleonic Code eliminated many, if not all, of the special rights and privileges enjoyed by aristocratic and religious figures; conversely, they also removed the special restrictions and burdens placed on Jewish communities. In many countries, this meant an end to Jewish ghettos. Certainly Rome was no exception: when Napoleon’s forces made their triumphant entrance into the city, a special point was made of physically demolishing the old ghetto walls.

Italian prime minister Luigi Luzzatti, who took office in 1910, was one of the world’s first Jewish heads of government (not converted to Christianity). Another Jew, Ernesto Nathan served as mayor of Rome from 1907 to 1913. By 1902, out of 350 senators, there were six Jews. By 1920, there were nineteen Jewish senators. A significant train of thought inside Italian Fascism, influenced by Nazism and its race theories, actively promoted anti-Semitism. Jews were depicted both as “rootless cosmopolitan” capitalist bourgeois and as communists. However, at least until the promulgation of the 1938 racial laws, a number of Italian Jews were sympathetic to the regime and occupied significant offices and positions in politics and economy. It is estimated that some Italian Jews participated in the October 1922 March on Rome that brought about Mussolini’s ascent to power.

It is estimated that about 10,000 Italian Jews were deported to concentration and death camps, of whom 7,700 perished in the Holocaust.The surviving community was able to maintain its distinctiveness throughout the following decades and continued to have a significant role in the fields of politics, literature, science and industry. A significant event that marked the Italian Jewish community was the conversion to Catholicism of the Chief Rabbi of Rome, Israel Zolli, in 1945.

The size of the Italian Jewish community has faced a slight but continuous drop throughout the postwar decades, partly because of emigration to Israel or the United States and partly because of low birth rates, assimilation and intermarriage, especially in the small congregations of the North. A significant increase occurred during the 1970s due to the arrival of Iranian Jews (following the ousting of the Shah) and North African Jews (mainly coming from Libya in the aftermath of Gaddafi’s seizure of power).

Each participant of the ECJS & JEP Summer Rome Event will receive the following:

Participants must prove financial situation warranting discount. A copy of a valid passport and/or references are required. Documents and/or letter outlining your request with contact details of either a Rabbi or Jewish community organization who can vouch for your limited finances should be sent via e-mail to info@ecjs.me

This is the date all registration and payments must be RECEIVED by the ECJS office. It is entirely the discretion of the ECJS office staff to decide whether a participant fulfills the demands for the offers, and ECJS hold the full right to charge non-offer price if they believe this is not the case.

You may cancel your registration until 22 July 2021, and ECJS pledges to fully refund you the event payment minus €30 administration processing fee and bank transfer fees when applicable.

If you cancel after 22 July 2021, and we are able to find a replacement, you will be refunded the event payment minus 30% and bank transfer fees when applicable, until 05 August 2021. All cancellations after 05 August 2021 will get no refund even for a medical emergency, except for Covid-19 related cancellation (see Covid-19 section). We will do our best to replace your spot once we have sold out the event for cancellations between 22 July and 05 August. The reason for this deduction is due to the risk we are taking, the longer administration process involved in changing your booking, and often involves more time and expensive phone calls trying to find a replacement.

After the deadline date, ECJS is NOT obliged to reimburse anyone for any reason whatsoever.  Reimbursement will not be given even for a medical emergency. ECJS will have already booked, ordered and paid for everything for you by this late date. We will not be able to receive refunds for any of these purchases. Please understand that ECJS is a non-profit organization. We invest over €100 for each member to attend the event beyond the member fee that was paid. With your cancellation we lose this investment as well.