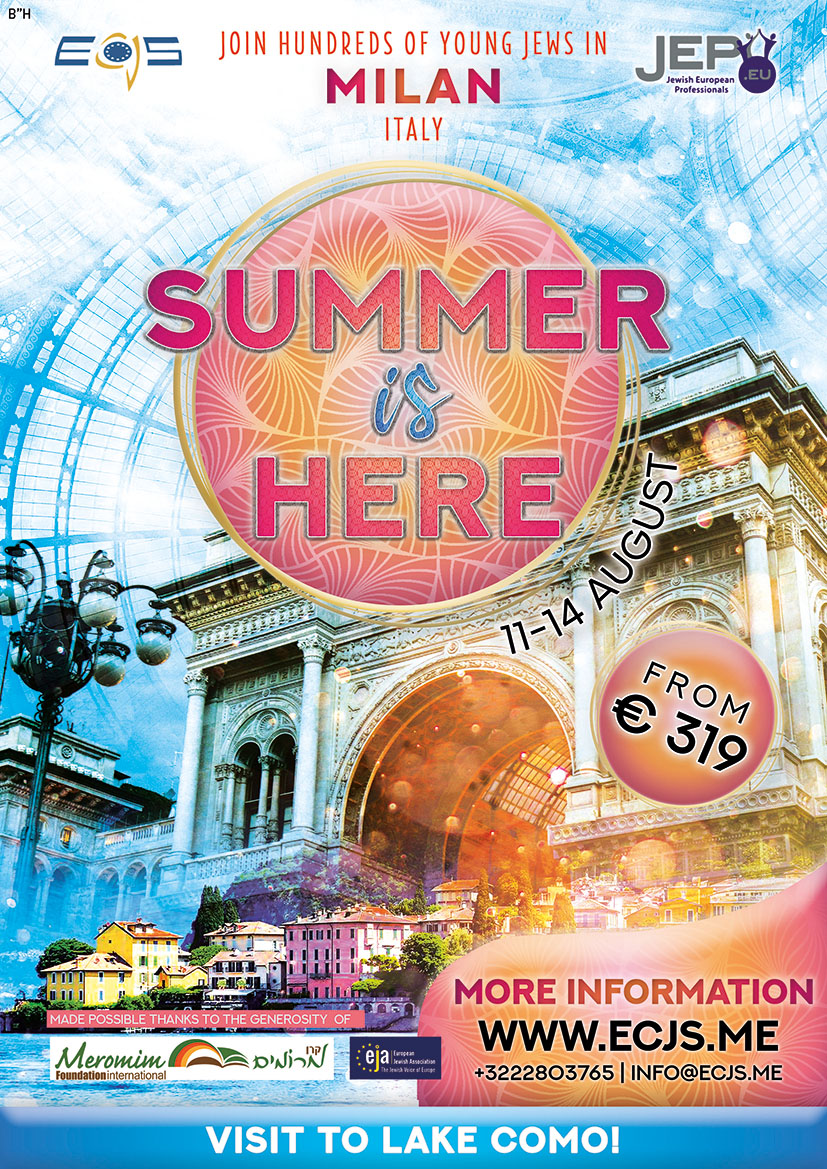 Come and enjoy a relaxing summer trip with other young Jews aged 18-39 in stylish Milan in Italy.

This event will follow all local Covid-19 regulations regarding masks, social distancing etc.

Please note that you must be registered on the ECJS website to purchase tickets to our events. Not yet registered? Become a member now!

All prices are per person and do not include travel to / from Milan or transfers to the hotel. If you pay by bank transfer please email us (info@ecjs.me) a copy of your receipt from the bank as we will not see your payment for 4-5 working days and we will not know you have paid.

Extra nights before and after the event are available through ECJS at our special group rates. If you request a twin occupancy extra night without a friend(s) and we are unable to match you up with another participant(s), you will be asked to upgrade to a single room.

Eastern Europeans or Former Soviet Union (born and living in currently), may take the 18-30 price option. To get these prices you must also hold a valid 1 year paid membership subscription.

DOUBLE+EXTRA BED ROOM INFORMATION: This is sharing a room with someone with 1 x double (big bed) + 1 x folding bed

TWIN ROOM INFORMATION: This is sharing a room with someone but with 2 separate beds.

TWIN ROOM INFORMATION: This is sharing a room with someone but with 2 separate beds.

LOCAL PACKAGES
For those people living in Milan only, we can offer these local packages for the weekend at special subsidized prices if you sign up as a FREE user on our website first. These packages will be updated soon and do not include any transport to and from the venues. 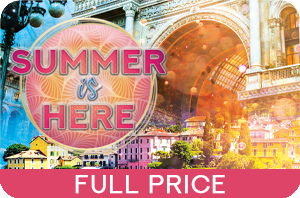 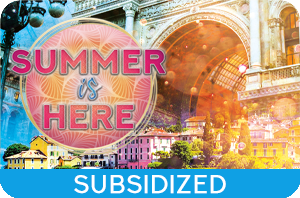 The event will start at 12:00pm in Milan on the Thursday and finish on Sunday at approximately 3:30pm.

MILAN AS A CITY:

Milan is Italy’s city of the future, a fast-paced metropolis where money talks, creativity is big business and looking good is an art form.

Ruled by the Caesars, Napoléon, the Austro-Hungarians and Mussolini, Milan has an ancient and fascinating history. After the unification of Italy in 1861, it also became an important industrial and cultural centre – a title it still holds today. While it may not have the historic attractions of other Italian cities, it holds its own with art collections old and new, which mark the genius of old masters and provoke new conversations about where the world is headed. Prestigious nights at La Scala, an illustrious literary heritage and a vibrant music scene also do much to debunk the city’s workaholic image.

Since Leonardo da Vinci broke all the rules in his stunning Last Supper, the indefatigably inventive Milanese seem to have skipped straight from the Renaissance to the 1900s. Not only is Milan a treasure trove of 20th-century art, but art deco and rationalist architecture abound. Today the city leads the way with the largest post-war re-development in Italy, impressive, sustainable architecture and a futuristic skyline modelled by Zaha Hadid, Daniel Libeskind and César Pelli. The city is also burgeoning into a hi-tech hub, home to start-ups galore and the likes of Google, Microsoft, Alibaba and Apple.

The Jewish presence in Milan dates back to the Roman period. Hebrew inscriptions from this period have been found by archaeologists. A Milanese synagogue dated back to at least the 4th century, but it was destroyed by local residents. Milanese Jews continued to live there over the centuries.

It was not until the 13th century, with the arrival of more Jews in the Lombardy region, that the Milanese community developed. A synagogue was built following a permission granted by Duke Filippo Maria Visconti in 1452. However, at the end of the century, the Milanese Jews were expelled.

Their return took place mainly at the beginning of the 19th century, when the city became the Lombard capital of the Napoleonic Kingdom of Italy. Seven Jewish families lived there in 1820, a figure that rose to 200 people twenty years later, a population mainly composed of students who came to take advantage of the opening of the universities without discrimination. Participating in the fight for national independence, the Milanese Jews were integrated into the Kingdom of Italy and were granted equal rights as citizens in 1859.

After the First World War, Jews from Eastern Europe settled in Milan. The influx of refugees increased further following the first persecutions in Germany. There were thus 12,000 Milanese Jews present in 1938.

At the beginning of the Second World War, about 5,000 Jews managed to escape to the USA and Israel. Following the German invasion, many Jews were captured, deported and murdered.

Fewer than 5,000 Jews lived in Milan after the war, including refugees from the surrounding villages. Some went to Israel, but other refugees settled in Milan, mainly from Egypt from the late 1940s. Thus, of the 8500 Milanese Jews in 1965, most were Sephardic. Other Jews from Arab countries integrated in Milan after the Six Day War and the persecutions.

The property is set in one of the greenest districts and is moments away from the heartbeat of the city, making it an ideal place to meet up and socialize for both business and leisure. Quiet haven within dynamic, urban Milan, the hotel offers a range of facilities and a warm welcome to the guests looking for an inspiring place to connect. An extensive garden gives an unmissable opportunity to relax in a quiet corner of the city and a fascinating setting to enjoy aperitifs and a pleasant outdoor time.

Celia was a naturally inclusive and caring person. She would not want anyone left out just because of their financial situation. On the contrary, they most need the opportunity to make Jewish friends and celebrate their Jewish identity. Through this scholarship, Celia can continue extending the gift of friendship and bring joy to those who need it most. Celia’s memory will live on, bringing happiness to others just as she did in life.

For this event, there will be a maximum of 4 Celia OBM Scholarships awarded, depending on suitable candidates with extremely limited financial capability who cannot normally participate in our events.

After ECJS & JEP receive your event ticket, you will receive an email with a detailed application form and terms and conditions, to apply for this limited scholarship.

Once you have submitted that completed form back to ECJS & JEP you will be informed in a short time period if you have been awarded the scholarship and the amount of funding for the scholarship.

Each participant of the ECJS & JEP Summer is Here Milan 2022 Event will receive the following:

Participants must prove financial situation warranting discount. A copy of a valid passport and/or references are required. Documents and/or letter outlining your request with contact details of either a Rabbi or Jewish community organization who can vouch for your limited finances should be sent via e-mail to info@ecjs.me

This is the date all registration and payments must be RECEIVED by the ECJS office. It is entirely the discretion of the ECJS office staff to decide whether a participant fulfills the demands for the offers, and ECJS hold the full right to charge non-offer price if they believe this is not the case. For the Celia OBM Scholarship this is awarded at entirely the discretion of the ECJS office and if information is found to be incorrectly supplied, then ECJS has the right to request payment up to the full actual real cost of the event.

For cancellations until 23:59 on 3 July 2022 we will refund all payment except for 30 Euros admin fee for our staff to process this cancellation. From 03 July 2022 until 23:59 on 20 July 2022, we will refund 70% of your payment, providing the event sells out and we manage to re-sell your place. Otherwise we will not be able to offer a refund. After 20 July 2022, all cancellations will get no refund even for a medical emergency, except for Covid-19 related cancellation where we obtain refund (see Covid-19 section). The reason for this deduction is due to the risk we are taking, as well as the event low prices, the longer administration process involved in changing your booking, and often involves more time and expensive phone calls trying to find a replacement.

ECJS will have already booked, ordered and paid for everything for you. We will not be able to receive refunds for any of these purchases. Please understand that ECJS is a non-profit organization. We invest over €100 for each member to attend the event beyond the member fee that was paid. With your cancellation we lose this investment as well.